Following are select findings from feasibility studies performed at three sites in the United States and one site in Europe, demonstrating the probable benefit of ReclaimTM DBS Therapy for OCD* in treating obsessive-compulsive disorder.1

Mean age for the patient cohort at time of implant was 37 years, with approximately equal numbers of males and females (53.8% and 46.2%). Mean duration of symptoms for these patients averaged 22 years, demonstrating the long-standing, treatment-resistant nature of the disorder in this population. Treatment duration ranged from 85.6 months to slightly over 3 months for the most recently treated individuals. All patients had been treated with multiple trials of medications and had also undergone cognitive behavioral therapy. Many patients remained on multiple stable medications. A majority of the patients (89%) also reported a history of comorbid depression (major depressive disorder (MDD) associated with their severe OCD.

YBOCS scores were collected over a period of up to 3 years, for the patients treated with DBS at 4 centers. On average, this patient population showed a progressive and sustained improvement in YBOCS ratings, as illustrated in the chart below. 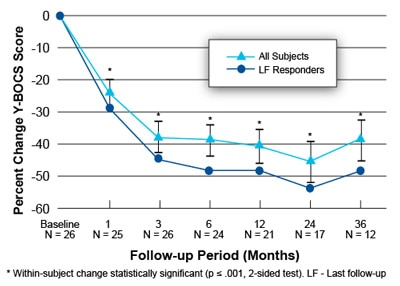 At 12 months, data was available for only 21 of the 26 subjects. At 12 months, the average YBOCS score for the group (n = 21) had decreased 40.7%, with a corresponding decrease of 45.4% for the cohort followed out to 24 months (n = 17). In the subgroup of patients that met clinical response criterion (> 25% or greater reduction on the YBOCS), the magnitude of these improvements was even greater. Using a last observation carried forward (LOCF) analysis for all patients, the average YBOCS reduction was 41.8% at the 12-month time point.

On average, patients treated with DBS at these 4 centers had a greater than two-thirds chance of attaining a meaningful clinical benefit (> 25% YBOCS decrease at last follow-up), and if a patient reached this response criterion, the average improvement at 6 months and 12 months post-treatment was approximately a 50% reduction in YBOCS score.

According to the Expert Consensus Panel on OCD (1997), a responder is considered a subject who demonstrates a 35% reduction in their YBOCS score and a partial responder is a subject with a 25% reduction in their YBOCS score. At 12 months, 10 subjects met the 35% response criterion and an additional 4 met the 25% responder criterion. An LOCF analysis at this time point results in 13 of 26 patients meeting the 35% response level, and 4 patients meeting the 25% level.

These changes in YBOCS scores measured in this patient group reflect a considerable reduction in symptom severity, as defined by this clinical rating scale. At baseline, 100% (26/26) of the patients enrolled into the study protocols at the 4 collaborating centers met the criterion for “severe” OCD (YBOCS score of 30 or greater) as defined by the Expert Consensus Panel on obsessive-compulsive disorder (1997).

There are 4 subtypes of OCD, according to the Leckman scheme. Subjects with the obsessions and checking subtype had the best response, i.e., 74.0%, as measured by the YBOCS. In addition, the majority of subjects had comorbid anxiety and depression, which also improved during treatment. No subjects with hoarding as their primary subtype were included in the study.2

In conjunction with the YBOCS measures, 3 of the 4 centers also collected corresponding ratings of Global Assessment of Function (GAF), a measure of overall psychological, social, and occupational functioning. At baseline, the majority of patients (20/21) had GAF scores ranging between 20 and 40, indicating very severe disability.

GAF scores improved over time for the vast majority of patients with the average score increasing from a baseline value of 34.8 (n = 21) to 56.1 (n = 20) at 6 months, 56.4 (n = 18) at 12 months, and 59.0 (n = 21) at last follow-up. An LOCF analysis at 12 months shows a similar level of improvement (mean = 57.6) for all 21 patients. This improvement in GAF for the patient population is illustrated in the chart below, which reflects a gradual and sustained increase in this measure of overall function, following deep brain stimulation.

Treating physicians also provided an impression of the overall, global condition of these patients after deep brain stimulation, including psychological, social, functional, occupational, and quality of life considerations. Overall, the treating physicians reported that approximately two-thirds of the patients were much better following deep brain stimulation, compared to their pre-treatment condition.

Humanitarian Device: Authorized by Federal (U.S.A.) law for use as an adjunct to medications and as an alternative to anterior capsulotomy for treatment of chronic, severe, treatment-resistant obsessive-compulsive disorder (OCD) in adult patients who have failed at least three selective serotonin reuptake inhibitors (SSRIs). The effectiveness of this device for this use has not been demonstrated.

From the Medtronic Manual Library by searching for the product name or model number.

GO TO THE LIBRARY